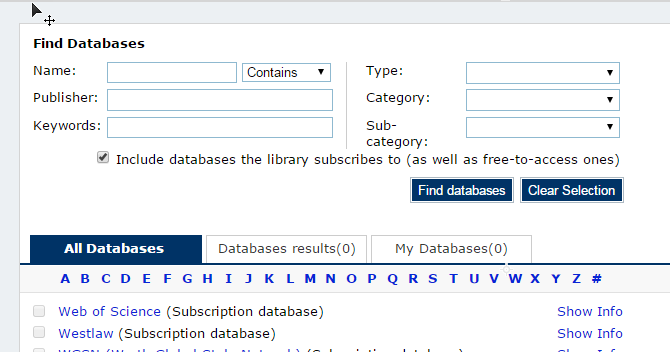 Following a detailed review by the Research Support and Learning and Teaching teams, a number of changes have been made to the list of resources made available through the Find Databases service of Library OneSearch (which will also be reflected, later today, in searches in the ‘All’ search tab of LOS). The changes are detailed below:

New entries have been created for the following resources:

The following resources have been withdrawn from the Find Databases service:

The entries for the following resources have been updated. Updates include: amended access URLs, changed help and guidance information, updated subject category assignments and revised descriptions:

If you’d like any further information about the specific changes that have been made to any of the resources listed above, please get in touch.

All of LLR’s subscription resources that could be moved to the new ProQuest platform were migrated at the start of the year, but from tomorrow any library customers who had bookmarked access to these withdrawn platforms will no longer be able to access them, and will be directed to the new ProQuest interface.

Three of LLR’s subscription resources will continue to be made available on one of the Chadwyck-Healey platforms not yet configured for migration:

These resources will be migrated to the new platform as soon as ProQuest has finished the necessary configuration work.

The British Periodicals collection, which provides access to full-text electronic facsimiles of more than 500 journals and periodicals publilshed between the 1680s and the 1930s has been activated in eSearch. Access is direct on-campus, and by university username and password from off-campus. The resource is described as follows:

British Periodicals provides access to the searchable full text of hundreds of periodicals from the late seventeenth century to the early twentieth, comprising millions of high-resolution facsimile page images.

The British Periodicals collection can be remote-searched and meta-searched in eSearch. Titles in the collection have been activated in SFX, and individual catalogue records for these items will be added to the Library Catalogue at the next update of ejournal records.

A guide to using Shibboleth authentication for the service from off-campus has been added to the eServices Support wiki.